Join us for a perfect countryside evening.

To make faith in the oldest of the region, Horta da Coutada gained local importance, since it was the main point of contact of the neighboring "Convento da Orada". This convent which will have originated in a church of the same name, linked to a very special devotion of D. Nuno Álvares Pereira, since he prayed there several times, among some of the battles against the Castilians. Although founded in 1670, the building was only finished in 1741, so it is possible that the creation of Horta da Coutada came about in the mid-eighteenth century. It was due to the inability of the Convent to be totally self-sufficient that Horta da Coutada was born, because its lands provided not only the crops so necessary for the monks, but especially the water that supplied the Convent through its daughter-in-law, existing today in the property. In addition there is still another area of the property, the current reception of the unit, which was the monks' favorite place to sleep their daily naps, so characteristic in this region. Located near of Telheiro village and Monsaraz, in the heart of Alentejo and now next to the largest lake in Europe, is Horta da Coutada. Come, visit us and enjoy your tranquility and quality of service, embrace the adventure of trying to discover the secret tunnel that, according to the Legend, connects this property to the Castle of Monsaraz. 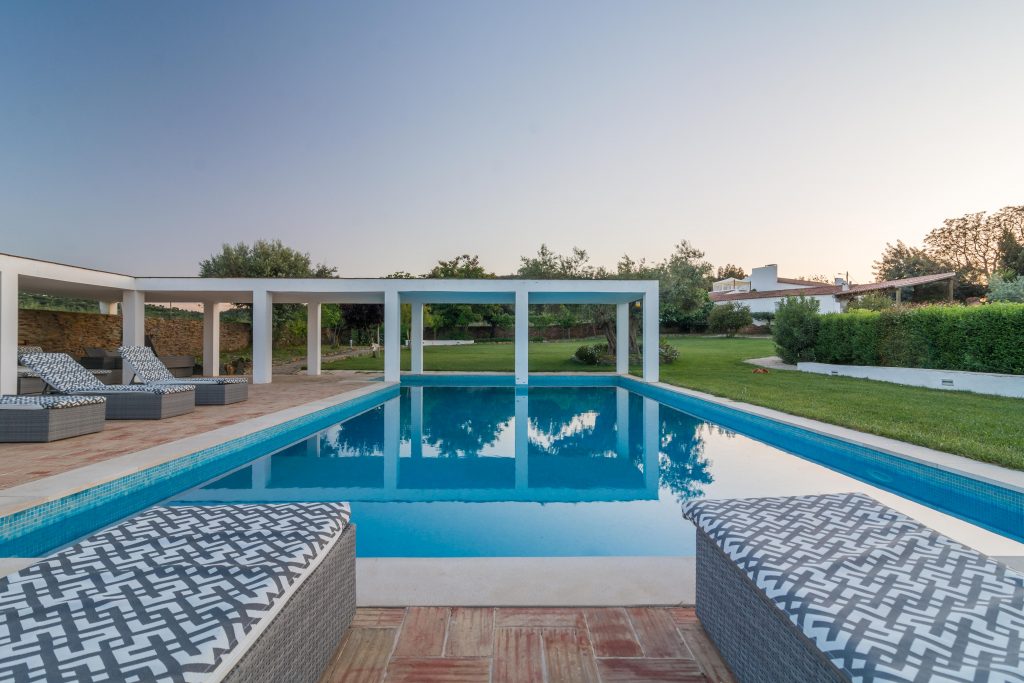 The pool, with an original infrastructure designed for the hottest days of the Alentejo summer, has a unique setting: between the megalithic museum “Cromeleque do Xerez” and the view of the Hermitage of São Bento by the castle. It is undoubtedly one of the most attractive spaces of this unit in Monsaraz, being an invitation to leisure and to rest. It is open all year and at any time of day or night you can enjoy the charm of this wonderful place.

The breakfast* of Horta da Coutada is served in the Garden room, a previous stable of the farm, refurbished and with rustic decoration, where instruments of past agricultural activities are exposed beside the traditional pitchers of Alentejo. This very cozy and quiet space overlooks the pool area and the garden of Horta da Coutada. The breakfast is very diverse, offering various products with the best quality of Alentejo, and can be taken between 9:00 a.m. to 12 a.m., except on the check-out day, which should be taken until 10:30 a.m. *Breakfast included in the stay. 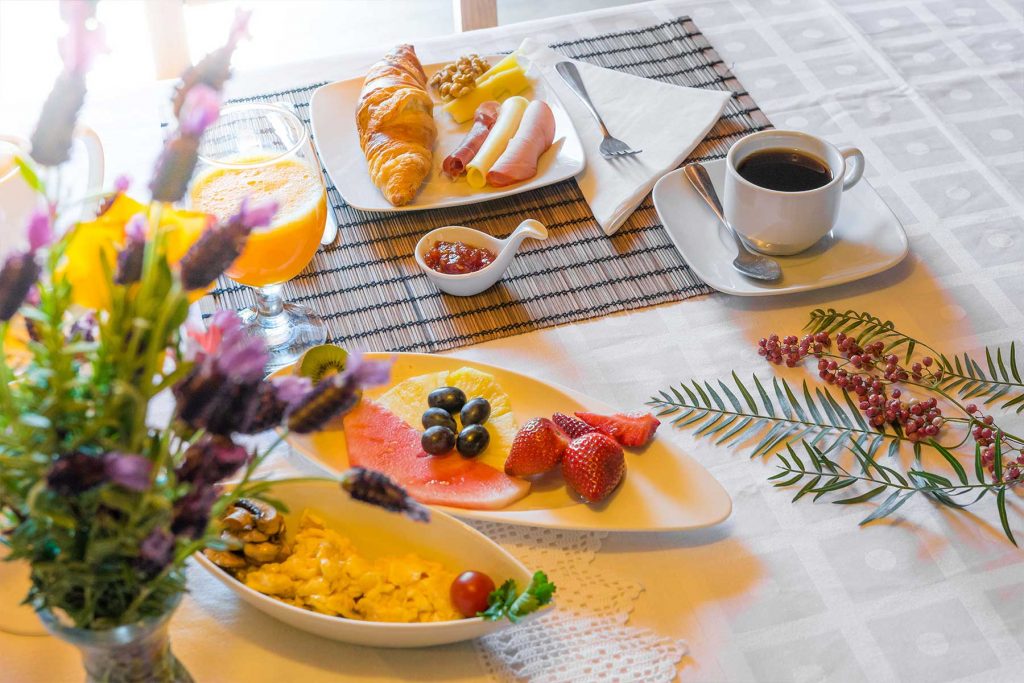 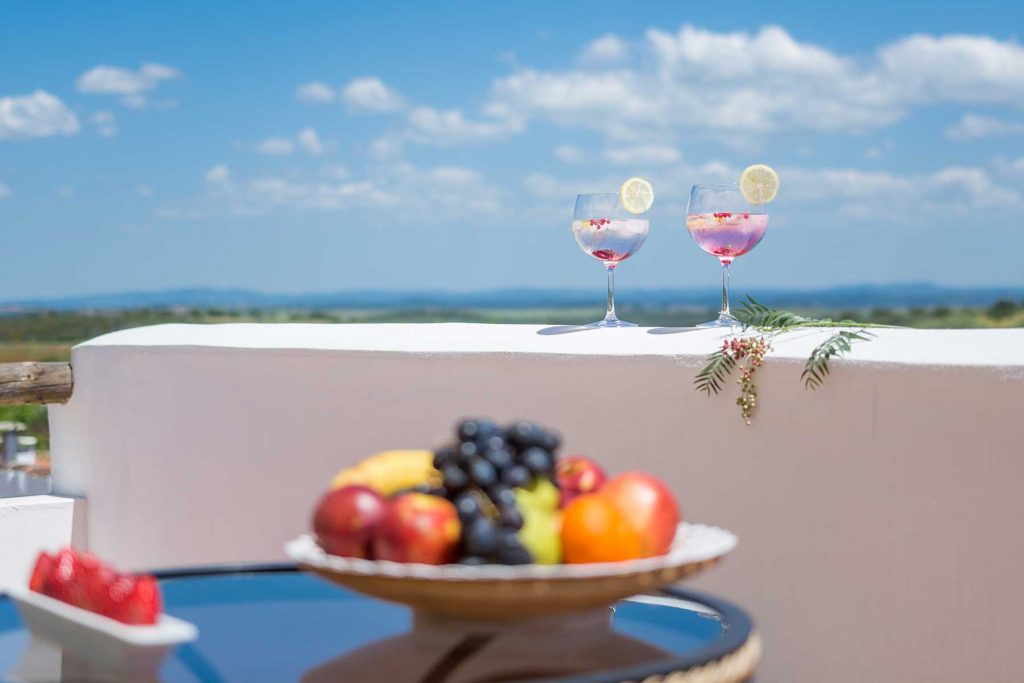 In addition of being the right place to expend a weekend or holidays, Horta da Coutada has also the service of events organization, such as a birthday party, wedding, christening or other celebration. This could be the ideal place for the party you are looking for! Contact us for more information. Also, we have the ideal venue for that party you're looking to organise! Contact us for more information. At Horta da Coutada we also have three types of massage that you can enjoy: - Relaxation Massage - A relaxing massage that provides physical and psychological benefits, relieving muscular pain, reducing anxiety and providing total relaxation. - 4 Hands Massage - Be dazzled by this massage ritual where you will refine all the sensory receptors, causing sensations that leave you somewhere between the clouds and the earth. A unique experience, where you will have 4 hands spreading energy and well-being. - Couple massage - This ritual is done in the same room or outdoor, with two therapists where all energies cross. You will find balance and well-being and certainly float along this spiritual journey.

See what other amenities we provide to our guests.

Although we trust you will spend more time enjoying the beautiful Alentejo landscapes or the quietness of our garden, all rooms are equipped with LCD TV.

Horta da Coutada offers a free Wi-Fi connection, allowing you to have internet access in all rooms and common areas of the property.

The farm offers a space, next to the swimming pool, with swings and slides, ideal for fun of the little ones.

We offer light snacks or regional meals by request. We serve various snacks such as toasts, cheeses and regional products, salads, snacks and some regional dishes.

Enjoy the beautiful trails around the estate by bike. The bicycle rental service is exclusively for our guests.

We have bar service until midnight. Enjoy our liqueurs or Gin's with flavors of Alentejo or taste one of the excellent wines of the region. Our natural fruit shakes are also famous.

"Amazing place to spend some relaxed days with the family. The rooms are very well decorated, cozy and clean. Staff is also super helpful, and the breakfast could not be any better. We will come back for sure!"
Madalena M.
"Great!! Peace, and and a very friendly staff. We will come back in August! The room is cozy and clean and the breakfast is delicious! Great restaurantes nearby, inside or around the castle."
Luís P.